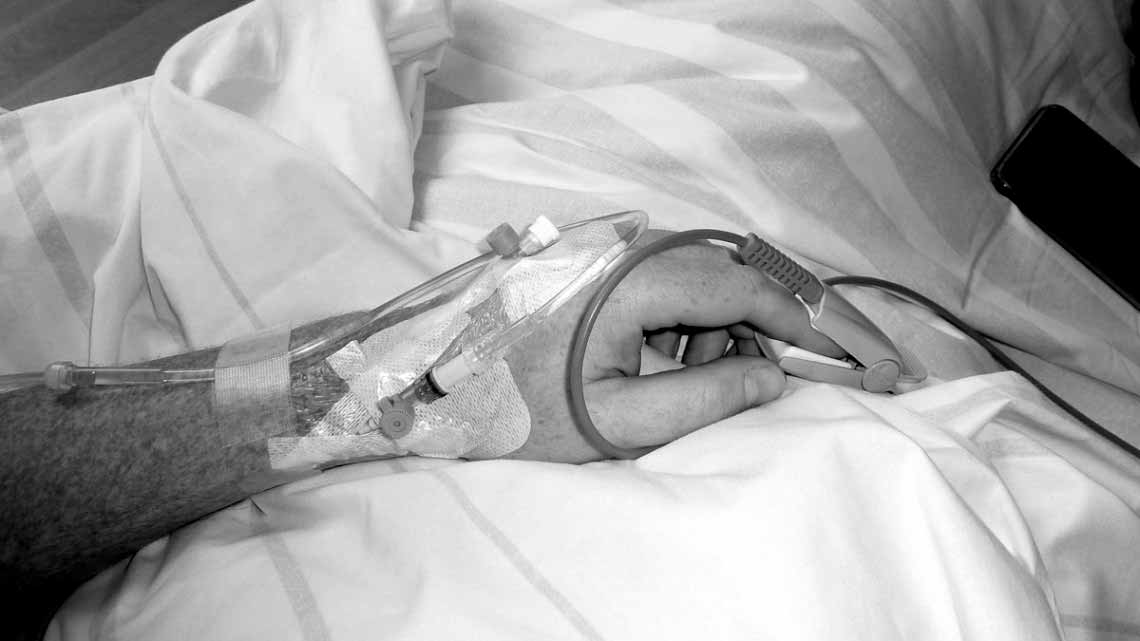 I’ve had to have an operation.

Before you ask… I’m doing real well, thanks!

To cut a very long, rather boring story short, I’ve been suffering from progressing osteoarthritis since around 2008, which rather unfortunately has been affecting my left hip for quite some time now.

For someone like me, who loves the great outdoors – hiking, walking and cycling, this was something of a nuisance. In actual fact, it was starting to impact on most aspects of my day-to-day life – when you have to start thinking whether you can walk to the local shop without shout-out-loud pain, something’s got to give.

In my case, it was a hip resurfacing operation. This is slightly different to a replacement, inasmuch as more of your femur [thighbone] is left intact. Whilst I’ve not done that much research into the nuts and bolts of what the surgeon has done to me, let’s just say that there are quite a few parallels between your common-or-garden stonemasonry and hip surgery, but with blood, muscle and sinew added into the mix.

As is usual for me, I’d kind of blundered into having this done. I’d had both MRI and X-Ray scans done as long ago as 2009, but when the revised scans were shown to me late last year, it was patently obvious that I had to go under the knife. Osteoarthritis is graded from one through to four, with four being the most severe. I was a four. It just goes to show that pain is a very personal thing. What’s odd, though is that some days were perfectly OK, whereas others were unbearable. I guess I was simply putting off the inevitable.

Firstly, I just needed to overcome my fears regarding general anaesthetic; the loss of control over one’s own destiny, basically. Regardless of how many friends told me that this was the ‘best part’, I was still worrying about it terribly, and as the day of the operation drew closer, the more I fretted. I should’ve listened to my mates – in hindsight, my major fears – to put it in layman’s terms – whether I actually came around after the operation, or died on the slab – were totally unwarranted. I realise now that I wouldn’t know anything about it anyway! 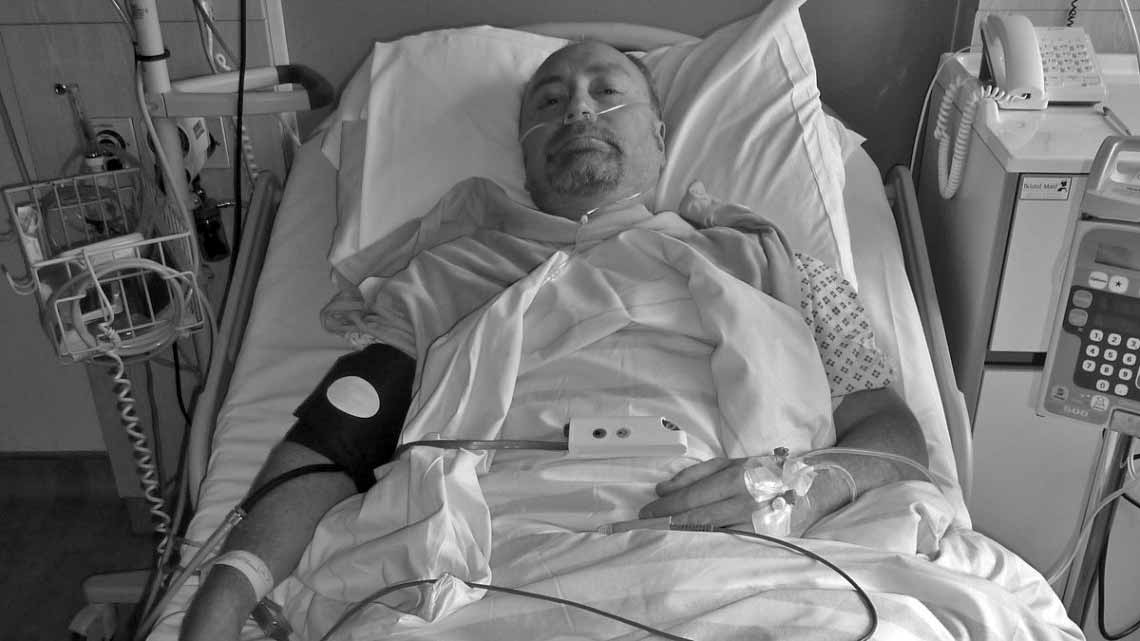 Lying in the pre-operation room awaiting surgery was obviously a totally new experience for me.

I’ve never been in hospital before, apart from visiting other people. So to lie there, surrounded by a dedicated team of people making sure I was OK, was quite surreal, really. I’d met my anaesthetist two weeks prior to this moment, and as she chatted to me about playing the piano, I drifted into unconsciousness.

The next thing I knew, I was coming round, post-theatre, waking out of a dream that at the time was totally vivid, but within minutes I couldn’t recollect at all.

Then I was back in my room, with Nina asking how I was. I couldn’t really communicate properly what with the effects of the general and the epidural rushing around my veins, so i just lay there for about three hours and tripped out on swaying grass and sunshine that I was seeing on the ceiling.

I was in hospital for four days. I’m not really sure what I expected to happen; all I can tell you is that parts of my anatomy that I expected to work immediately, didn’t, and that I had to learn how to deal with this pretty quickly. For instance, it was pretty freaky for my brain to be instructing my operated leg to abduct [move outwards] whilst lying flat, but then not being able to perform this most basic of physical tasks. That took some dealing with.

But by the time came to leave the hospital, I was up on crutches and just about able to move my leg around  when I wanted to. That was a huge relief, as at the time, you really don’t think you’ll ever be able to do all of the stuff you take so for granted, ever again. 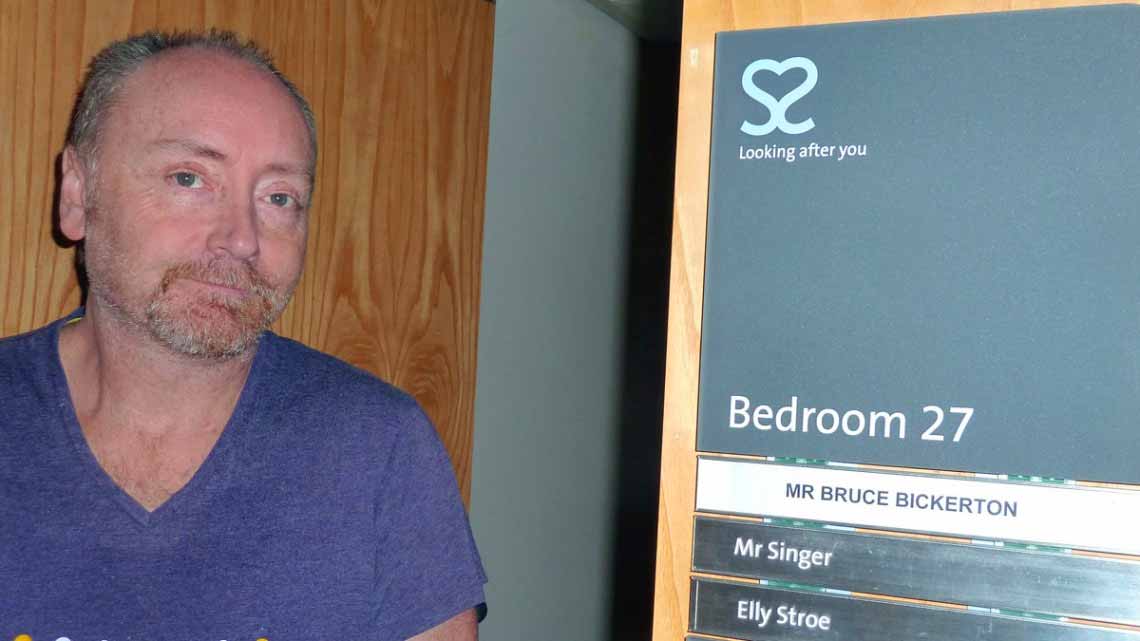 It’s hard to express now how it felt to finally get home and to sit outside in the March sunshine, listening to birdsong and slowly breathe deep lungful’s of fresh air, but in a word, it was amazing.

As I write this, it’s now just over 4 weeks since I underwent this experience, and as you’d imagine, I’ve learned a fair bit about myself. Most of the stuff that I thought I’d be doing when I was recuperating at home has simply gone out of the window – I’d genuinely expected to be doing loads of music in my studio, but the reality has been that I’ve been quite happy doing my exercises and resting up; being a good boy.

It’s a common fact that the quality of your recovery and eventual physical well-being is down to how you listen to your body in the days and weeks after the operation, so I’ve been trying hard to really look after myself.

One thing that has constantly crossing my mind are the people who have to have this procedure but have no-one to help them cope during their recovery. Nina has been incredibly supportive throughout this first month, and I do wonder how I’d have managed if I’d have come out to an empty house. Simple things, such as sitting on the toilet to take a crap, or pulling your pants and trousers on – these suddenly become pretty monumental tasks if you’re having to deal with it all on your own.

The cabin fever that I thought I would experience hasn’t actually come to fruition either… yet. I still have a couple of weeks to go until I’m signed off by my surgeon which will mean that I can drive a vehicle, but I’m sure I’ll be OK. Whilst on the subject of travel – big thanks to Chris Pettit for the lifts that he’s given me to the physiotherapist – invaluable support, mate.

You’ll doubtless be pleased to hear that I’ve not been completely bone idle during the last month. I know it sounds like I’m some bloody nerd, but the rather large task of cataloguing my music library is now complete, and the track that I’ve had up on my mixing desk for the last 7 weeks is now complete. I’ve managed to shoehorn in a fresh edition of my radio show and I’m now working on some new material.