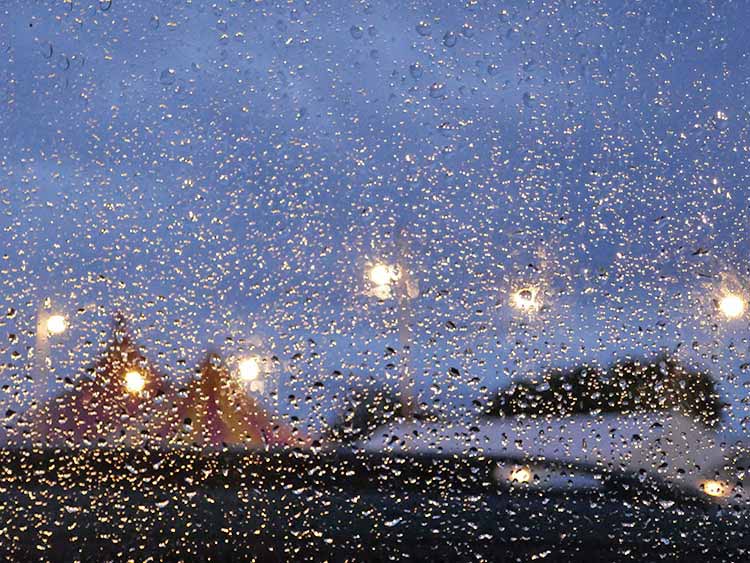 Without wanting to come across as being any way egotistical, I’d oft wondered why I’d never been booked to play at any of the Whirl-y-gig parties in central London. They’re actually quite the stuff of legend, being the ‘original’ chill out event, pre-dating by some years the Big Chill Union Chapel parties that took place in the early to mid nineties.

I’m ashamed to admit that I’d never attended any of their London events. originally held on a monthly basis in Shoreditch town hall, way, way before Shoreditch was ever deemed to be ‘too cool for school’. Throughout the early part of the nineties, I kept hearing about the party through various friends; it sounded like a really communal and friendly vibe, the night culminating in a huge parachute [which was suspended throughout proceedings high up in the ceiling cavity] being released and draping the entire audience, who were then encouraged to lie down and listen to the healing music that the resident DJ, ‘Monkey Pilot’, was playing.

My mate Matt Parford had been a handful of times, and also mentioned that his Dad had rather randomly arranged a mortgage for Monkey Pilot and his wife Sue when they bought a small cottage just over the way from Nina and I on Harrow Hill at the end of the 1980s.

So I was naturally pleased as punch when Mr. Pilot got in touch with me during the Spring of this year to ask if I’d like to play at the annual ‘Fayre’ that they’d started putting on around 5 years ago. Obviously, neither Monkey nor Pilot are his birth names, it’s actually Richard. Richard and I bounced a few super-friendly emails around, and it was all systems go.

Richard and Sue left Harrow a good few years ago to move to Somerset; a small place called Langton, within sight of the famed Glastonbury Tor. The annual party takes place near their home atop of a small hillock, with breathtaking views over the undulating landscape towards the famous monument.

At least, they would’ve been breathtaking had the weather not been so unkind to us upon arrival at the site. I’d driven down to Somerset with Ed, my old mate and occasional collaborator, who was rather grudgingly acting as my plus 1. I say grudgingly – Ed doesn’t really like leaving North Yorkshire much these days, unless it’s to travel further north, either towards Northumbria or border country. Mind you, once he’s past Sheffield on the M1 heading south, he’s usually alright.

When we arrived at the small site, it had been raining sufficiently steadily enough to create a rather muddy, pitted drive onto site. I’m always a bit paranoid about driving my old VW campervan into muddy conditions – it’s a heavy vehicle with rear wheel drive and quite skinny shoes, so she tends to get stuck quite easily. After a quick chat with the amiable security guy on the gate, he agreed that I could park right next to the exit, rather than driving the distance to where live in vehicles should’ve ideally been parked up. Ed and I thanked him and got the VW ready for living in. 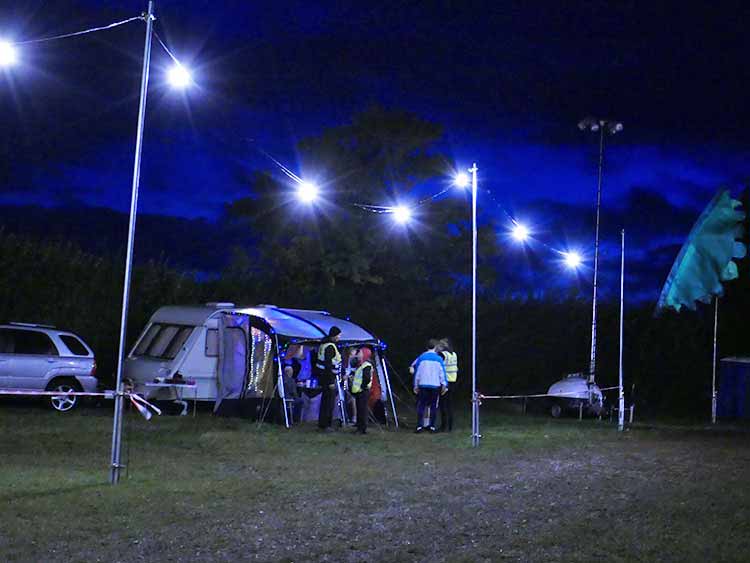 Richard and Sue had kindly asked me to open the event this year, so my understanding was that I was due on at 5pm. I’d wandered over to the main stage, which was actually a large circus marquee which had been beautifully dressed and lit and was furnished with a great soundsystem, to ask Richard about gig timings. As the weather was slightly inclement, things were running a little later than expected, so I’m pretty sure he told me to come along at ‘around 5ish’..

By this point it was 3.30pm, so Ed and I drifted back over to the van and cracked a couple of IPAs. After playing two festivals in short succession, I was pretty laid back about this one; I didn’t expect a large audience, as the majority of punters were due to turn up later on in the evening. We sat in silence, gazing out of the rain-streaked windows of the camper at some of the weird and wonderful people who were walking onto site. What struck me was the wide-ranging demographic; this is truly a family affair, which I guess if one takes into account the fact that the Whirl-y-Gig is now over 30 years old, then it’s bound to become something that’s enjoyed by familial generations who’ve grown up loving the monthly event in London.

Anyway, 5pm arrived, so I gathered my headphones and trusty CD wallet of exclusive alucidnation material and Ed and I sauntered over the site towards the main marquee. The music that had been playing had now ceased and I could hear the MC, Mary [Richard’s wife] on the mic, announcing ‘alucidnation!’… and then falteringly, asking where alucidnation was… did anyone know? At that point, I entered the tent and made my way through the bemused crowd towards the stage, who started applauding and laughing. It must’ve been quite comical. When Richard had said ‘around 5′ I hadn’t realised he’d meant 1700hrs on the dot!

I obviously needed a little time to get myself sorted, so whilst I dithered around picking a track to play and familiarising myself with the Pioneer CD mixers, Sue chatted idly to the audience, which, according to Richard, when I was chatting to him post gig, was one of the largest they’d had for an opening act. Whether that’s because it was because of alucidnation performing, or whether it was because it was still pissing it down outside of the marquee and people just needed to shelter from the elements, is a matter of some debate, but I’d wager the reason was probably the latter…

The crowd seemed to want to dance, so I played a predominantly beats-driven set, delving into my dim and distant back catalogue to play stuff I’d composed during the mid nineties. Lots of people appeared to groove on it and I had a pretty enthusiastic, bouncy audience. 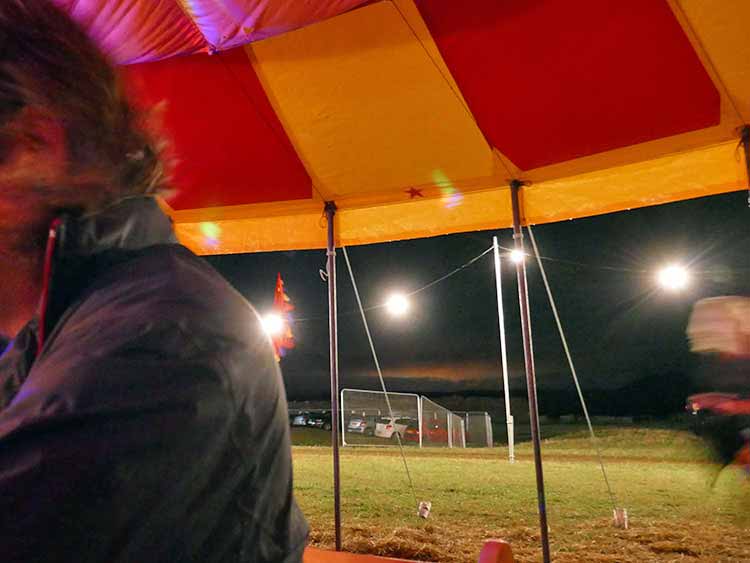 Ed and I had decided to stay for just the one night, so after my gig had ended, we ventured into the cafe tent, where they’d had the fine idea of piping the music being played in the main tent into the cafe soundsystem, but at a much lower volume; quiet enough to make low conversation possible. Unfortunately, whilst the catering was really pretty damned good, the beers on tap weren’t, so we had a pretty sensible evening, retiring at a reasonable hour. Earlier on, the weather had finally started to behave itself and this meant that the communal fire had been lit, and a few people were sat around it, enjoying chat and music from the main marquee.

Whirl-y-Fayre is billed as a ’round the clock global music event’ and, although the music did go on all night, it was at a sufficiently low volume to enable Ed and I to get a decent nights sleep, an important aspect if you’re a couple of middle-aged farts who need their kip.

The Saturday morning was truly lovely, with the sun finally making an appearance and a stiff southerly breeze pushing the scudding clouds across a bright blue sky. We decided that it’d be rude not to travel to firstly Glastonbury to view the Tor, which Ed had never seen ‘in the flesh’, and then onto Frome to visit Pete Lawrence. We undertook both, and ended up crashing in the wagon outside Pete’s gaff in the middle of Frome town.

A great festival and a great, packed weekend. I’ll be back.