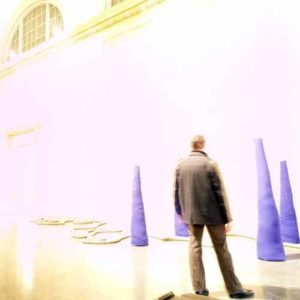 My old friend and sometime collaborator John Rixon got in touch in the early part of 2009 to let me know about a gig at the Tate Gallery that he’d been invited to curate. He was justifiably excited; being given a space like Tate Britain to put on what you want to is a fantastic opportunity!

I was really looking forward to this, and as the time approached I had a conversation with John where we agreed that it’d be best if I reverted back to a 35mm slide show for this event. I was more than happy to do this; after all when I started playing gigs back in 2000 I kind of pioneered the ‘less is more’ approach to visuals. It seemed to me that everyone else was dealing in manic, speedy imagery with all of the new software that was being released at the time – all I wanted was something that reflected what my music was attempting to convey – peace and tranquility. I’ve got a big library of photographic work and it seemed a shame not to share it!

Anyway, fast forward to the event itself… we’d been asked to get there early on that day for a health and safety briefing. In stark contrast to when I last showed my work here in 2006, this side of things was totally over the top. It seems that these days, we, as a country have adopted the ‘sue me, sue you’ mentality from our American cousins, so just to be on the safe side, we were subjected to a 20 minute preamble about fire exits and where not to place mains cables. It’s all synonymous with the whole nanny state that we’ve unfortunately sleepwalked into.

I’m afraid I walked out halfway through the briefing and went to see what was going on in my space. I was in a similar place to the 2006 gig; beautiful vaulted ceilings which produced a fantastic ambience. The Tate had organised 4 Kodak EktaPro’s with a couple of pro-dissolve units; I’d organised 4 carousels-worth of work and we set the dissolve times to the maximum 10 seconds, so as to guarantee an abstract bleed from each picture to the next. It worked really well. 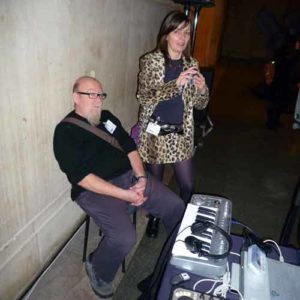 The only downside was that [due to said draconian health and safety laws] we couldn’t turn the lighting down sufficiently low enough, so that some of my less contrasty work was nigh-on invisible. However, it didn’t seem to deter people from standing and gazing at the constantly shifting imagery.

This time around, I made sure that I took along a supply of business cards and also some CD and vinyl stock. I made a good few fresh connections on the night, and also managed to sell a load of CDs too!

But I’ve got to say that the best thing in my opinion was the fact that John managed to pull together some old-school Big Chillers. It really was magical to see so many old faces; artists and friends that I’d met throughout my career with the Big Chill that had all come together to make this the night it turned out to be… a really special gig.

I’d just like to reitterate my thanks to John, to Adrian Shaw for putting this on, and also Matt for his help with the slide projectors… not forgetting Ulf for wading in and helping me sort out the slides that I’d managed to put into the carousels the wrong way round!