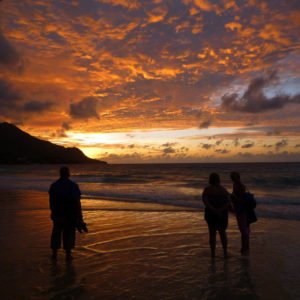 Wow. What can I say?

One of the most interesting events that I’ve been witness to; odd, yet engaging. It was back in late September when Pete Lawrence put me in touch with the Russian organiser, Samir Askerov. Samir is the official Acid Jazz Records representative for Eastern Europe, and this was to be the first time that he’d put together a music festival. Upon looking at the website, it transpired that we were to be staying at the Coral Strand hotel, right on Beau Vallon beach, which is [quite rightly] a honeymooners’ paradise – a long expanse of white sandy beach with views onto the Indian Ocean.

On the 30th October, Nina and I set off for Heathrow airport, where we were due to meet up with Pete, Helen and Emily Davis, who was also performing. We’d just checked our gear in when we bumped into Pete, who was going to try to leave the UK on his son’s passport! He’d mistakenly picked up Joey’s passport instead of his own… a courier was racing against time to try to deliver the right passport safely into Pete’s hands before the gate closed at 5.45pm. It was always going to be tight, but hopes were dashed when the courier, not 2 miles from the airport encountered solid traffic due to an accident on the M4… So near yet so far. We had to leave without Pete, much to the upset of Helen… Never mind – he managed to secure a flight out a couple of days later.

The flight took off, ironically, an hour late and we embarked on the first leg of the journey which took us to Zurich. Then it was a straight 10 hour flight direct to the Seychelles. 10 hours is a long time, let alone if you’re confined to a cylindrical tube 33,000ft up in the sky. I ordered a couple of bloody mary’s and tried [in vain] to get some kip. In actual fact, the flight didn’t seem to take that long, and at about 9am local time, we landed on the Seychelles.

Of course, upon leaving the air conditioned comfort of the plane, one was immediately hit by a blast of 31 degree humid air. The light there was incredible after the greyness of the UK. We were met at customs by a very helpful girl who ensured that we were ushered through quickly to an awaiting minibus, which took Nina, Talvin Singh, Sinbad and I to the hotel.

We hooked up with Samir and other OceanBeat representatives at this point. The hotel was amazing; spacious rooms with en-suite bathrooms and lounges with views out onto the sea. We set about making ourselves at home… no-one was really sure about the schedules as there wasn’t one. We had a rough timetable to work from, but none of us were really sure who the audience were and where they were! To be honest, by this point I was pretty knackered and ended up sleeping until the early evening, whereupon we dined on the hotel grub. That night Samir and the rest of the Russian contingent organised a rather nice little private party for us lot, so lashings of the local rum and weed were laid on… an intoxicating evening for sure… I ended up leaving early, unable to keep up with the conversations that were being bandied about. 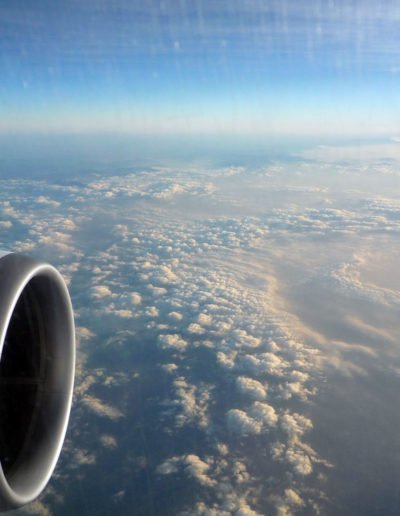 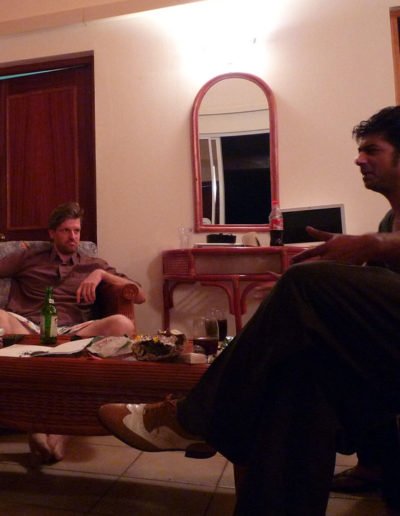 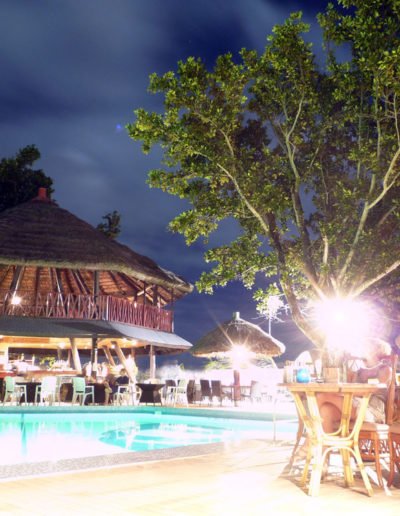 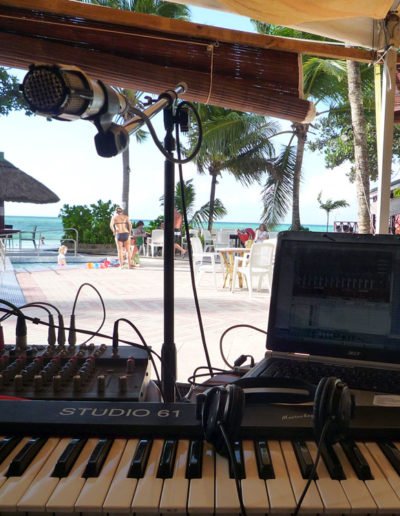 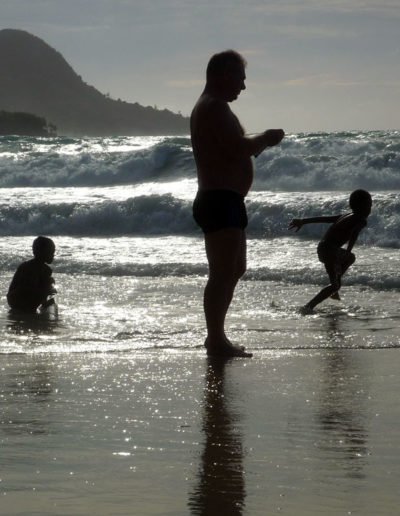 The first day proper saw the three young lads that had been drafted in to DJ play from midday through to around 4pm. The sounds that they were playing weren’t sympathetic to our surroundings; loud techno, 4:4 banging beats and crashing mixes just weren’t the order of the day as far as I [and the others] were concerned. I dunno; when you’re in a place like the Seychelles, one should play music that reflects the environment, and these guys just weren’t. I volunteered myself to go on and accompany the sunset, which I did with aplomb as far as our crowd were concerned. However, halfway through my set [primarily old soul tunes and a bit of dub] a rather beefy American dude waddled up and asked me where “the fucking beats were”. He seemed slightly aggrieved that I’d not carried on playing the 4 to the floor stuff that my younger colleagues had insisted on playing earlier in the day. I tried to explain to him that I was trying to slow things down a bit, but by this point his interjection had rattled me somewhat. After a further half hour, I didn’t obviously adhere to his request, as he started to walk towards the decks, but I stopped him in his tracks by mouthing a definite “No”. After I’d finished playing, I went over to his table and attempted to reconcile the situation by explaining that one is never going to appease all of the people all of the time, but he just wasn’t having any of it… We learned later that the hotel was also a temporary home to the US Navy who were involved with manoeuvres on the Indian Ocean due to Somalian pirates becoming more prevalent. You can imagine that pissed-up military types were never going to be easy bedfellows throughout the week. In actual fact, aside from the odd bad apple, they were OK, content to sit over at the open air bar, shooting pool and getting faced on the local brew.

The oddest thing about this festival was that the hotel wasn’t booked out exclusively for Ocean Beat attendees. I’d say that around 35% of the people there were into the vibe, the remaining 65% were people who were there for a relaxing and peaceful time, chilling on a beautiful island. Unfortunately, because I tend to think about other people, this got me down somewhat. I know if I’d gone to a place as stunning as Beau Vallon, the last thing I’d want to encounter is a 3KW rig blasting out music that I didn’t want to listen to. The hotel reception was regularly the scene of various disgruntled customers complaining about what they were being subjected to. Also, it seems to take me at least three or four days to acclimatise to new surroundings; as a consequence

I probably missed out on one of the best things that was laid on for us – a trip out to a secluded beach on the south eastern tip of the island where a small sound system, food and other entertainment had been laid on for us. Pete [who by this time had arrived] texted me to tell me how good the snorkelling was, but Nina and I had decided to take a local bus over to the capital, Victoria. This proved to be a rather sweaty and humid experience; the temperature was well up into the high 30s and we sought the sanctuary of the Local History Museum where the air conditioning proved too much of a draw.

Anyway, that night, we were treated to some sublime live music courtesy of Emily Davies and Talvin Singh. Emily is a singer songwriter blessed with the voice of an angel; perfect pitch and delivery. Although very nervous before her performance, she carried it off nicely, wowing the [small] crowd. Later on, Talvin came on and played a percussive set, playing tabla with a backing track accompaniment courtesy of Leafcutter John. It was a pretty electrifying performance. He asked Emily to come up and play some guitar with him, and also Pete took to the drum kit for the first time in about 20 years too! It wasn’t the most cohesive of performances, but it reflected the ‘organic’ nature of the festival perfectly. It was left to Mario Kamien and Sinbad to DJ after this, playing some pretty funky stuff with Sinbad showing off some choice dance moves behind the decks, too! 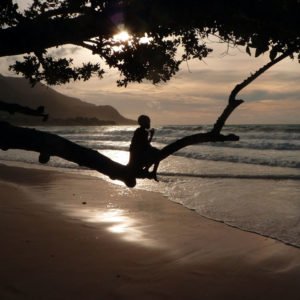 I think I must have made a conscious decision to enjoy myself for the remainder of the time I was there. Mozez played a really great set with his new band – proper consummate musicianship from Mark, Isaac and Hamlet and a stunning vocal performance from Osmond himself. Probably the live music highlight of my festival, I guess. Earlier on that day, I’d played my one and only live set, a disjointed and awkward hour and half where I sat and performed a mostly improvised and vocal set that left me deeply dissatisfied… other people seemed to enjoy it, though. I even had a guy and his wife tell me that it was the most beautiful music that he’d ever heard! The whole self-flagellation thing seems to be a common thing among performers as it transpired that Mozez suffers from the same problem.

In my time there, I played another beautiful sunset set, immersing the audience in blissful ambience for the majority of my set. Other stand outs were Pete Lawrence’s set on the Thursday night, where he played a varied and eclectic set, typical of Pete, I guess… most enjoyable.
And on the penultimate night, I joined Samir on the decks, which was an enjoyable experience for the both of us. Strangely, Samir et al had organised a night out at a local nightclub for us all, but for me and the majority of the others, the draw of the ocean and the tranquil night was too much; we stayed behind and witnessed possibly the finest DJ set of the week courtesy of Mario Kamien – sublime music from all over the world, and just what the doctor ordered for the final night. 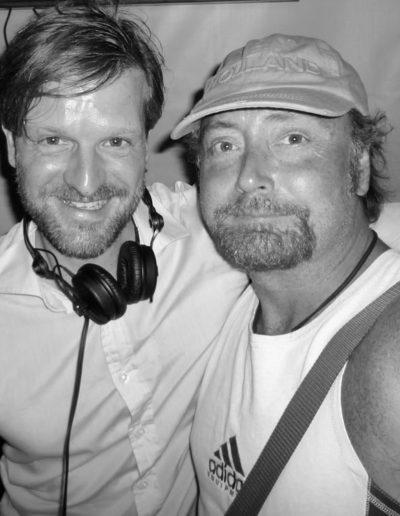 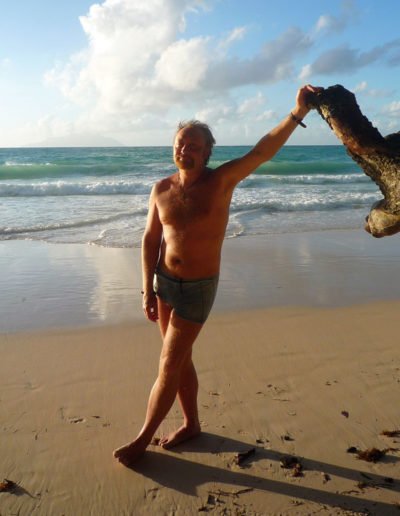 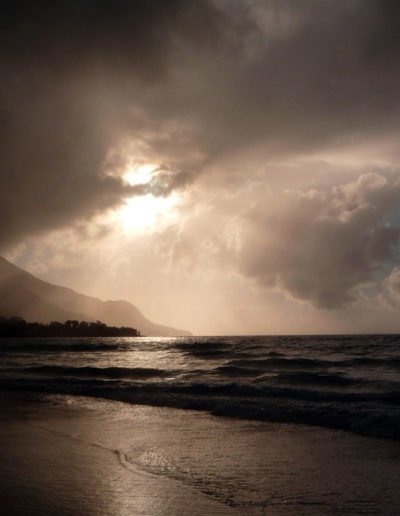 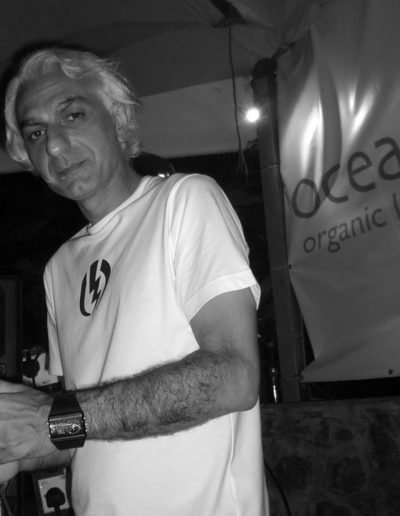 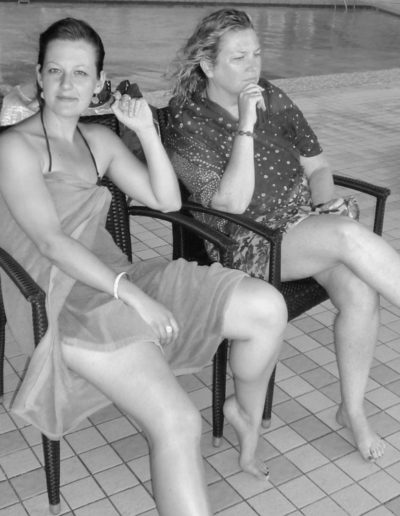 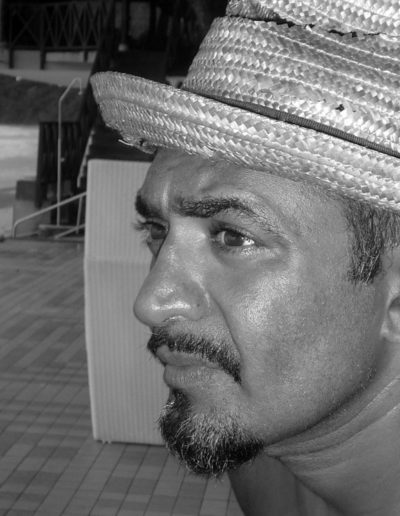 The great thing was that we had pretty much a full day to spend chilling on the Beau Vallon beach before our flight which took off at about 11pm local time that night. By this time I’d well and truly settled into the OceanBeat vibe, and could’ve spent a few more days out there.
And it was only when we landed in the UK after a 10 hour flight and bore witness to a monochromatic London skyline that we realised what a super trip we’d enjoyed.

I’d like to thank Samir Askerov and the rest of the Russian team that put this inaugural event on for having me there. Also a big up to Pete for putting my name forward for this…