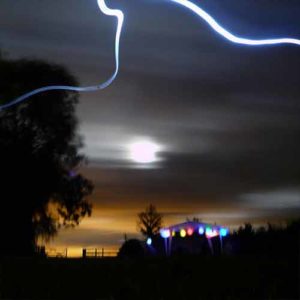 Pete Lawrence, who’d set up The Big Chill in the early nineties left in 2007 to pursue fresh avenues. Since that point he’s curated a few bits and pieces, including some gigs at his local church showcasing the likes of Andrew Cronshaw and the Swingle Singers. When he contacted me early in 2010 to tell me that he was sorting some of the music at this festival, I was excited to be asked to get involved. Along with Alan James, he’d been invited to curate all of the music on the Saturday at this two day festival. It transpired that HaselStock had been running [on and off] for the past twelve years and was very much a family affair.

Each year, the Hewetsons, who own the house and the surrounding land on beautifully situated Northamptonshire countryside open their house and fields to about 500 revellers to raise money for charity and, well, simply to get a lovely crowd of people together to enjoy themselves. It’s a formula that obviously works – a lot of the people I spoke to over the weekend had attended the gathering for the majority of the last 12 years… which is the best testament, really.

Things were due to kick off at 6pm on the Friday night, so Nina and I made sure that we arrived on site early-ish so as to claim a decent pitch and reserve some room for our fellow campers; on arriving we were greeted by friendly folk on the gate; all quite reminiscent of the first Black Mountains Big Chill. In stark contrast to larger festivals, it was easy to bump into friends, and we did almost straight away – Matt and Yeelin plus their two kids Maddie and Howie were just finishing setting up their camp, so we plotted up next door. It’s been a while since I’ve partied with them, and it was fantastic hanging out with such top people all weekend. Ed and Nina turned up in their wagon about an hour or so later, followed last but not least by Deb, Chris and Dave. The circle was complete. 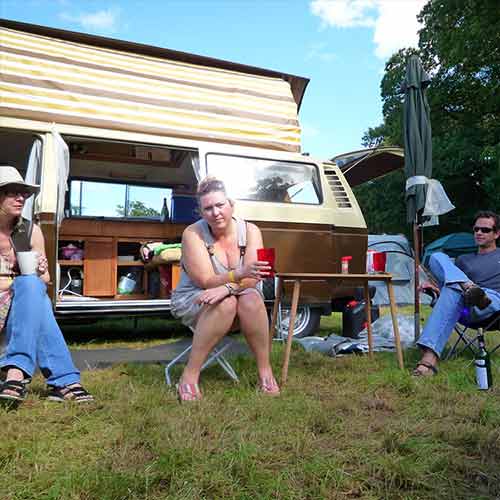 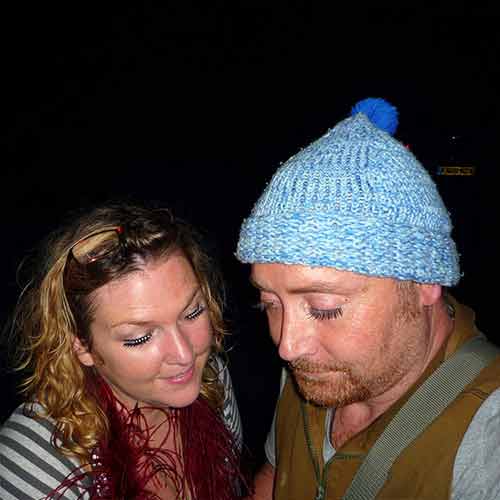 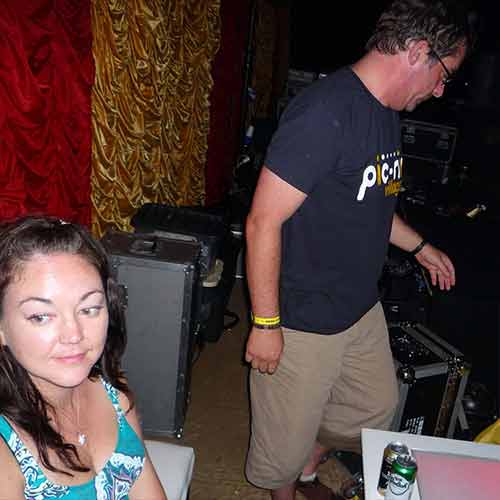 For the ticket price, which was about £90, Friday evening came free! At the gate, you were handed a food voucher and enough tokens for eight drinks – unlike some of the larger, more corporate affairs, there was some really good real ale on tap, as well as some rather tasty cocktails that washed down the hog roast that was also laid on. The whole site had been decorated and lit beautifully; obviously a whole lot of time and effort had gone into making the weekend really special. The Friday evenings entertainment took place in a wood barn, which had been draped out and furnished with old furniture and plenty of seating. The music was a mish-mash of various DJs. plus a band called Badger Badger, which I really couldn’t get a handle on as the bass in the barn was simply too much. I made good use of the tokens, eating some great pork and drinking a few ales.

So, Saturday was ushered in in traditional festival style, sporting a vague hangover and feeling slightly spaced out. Today was the day that Pete and Alan had programmed, I have to say that I tend to gravitate towards events where there’s just the one focal point – i.e. you either go and watch the music, or you don’t; choice is not always necessarily a good thing!

So we kicked off at about midday with AJ spinning some tunes on the outdoor stage – the usual quality. At 2.30, the lovely Emily Davies played a folk set showcasing a few new tunes that I haven’t heard her sing before. I was on after her, and learning from sets I’d performed earlier in 2010, I stuck to the same formula and played my set off CDs and ran backing tracks from my laptop, the power supply of which I’d remembered to bring with me this time!

The weather had been, erm, broody until this point. It was very warm, almost close when the breeze from the valley dropped away, but I’m pleased to say that apart a couple of light showers that lasted about 30 seconds or so, the climate smiled on me and I was able to play my full two hour set outside. My audience were absolutely fantastic – an appreciative, captive crowd that I managed to hold onto for the duration of my set. I sang a few tunes, but primarily it was an alucidnation DJ set, and it worked a treat. I had loads of really positive feedback, including a touching conversation with a decent bloke called Jeff, who told me that ‘I’m Not Bad’ had been really helpful throughout a very negative period in his life when he was going through a rather messy divorce. It’s not the first time that I’ve spoken with people who’ve said similar things about my music – feedback like that makes the whole thing tangible and I’m glad that I’m able to reach my audience on that kind of level. It’s kind of humbling. 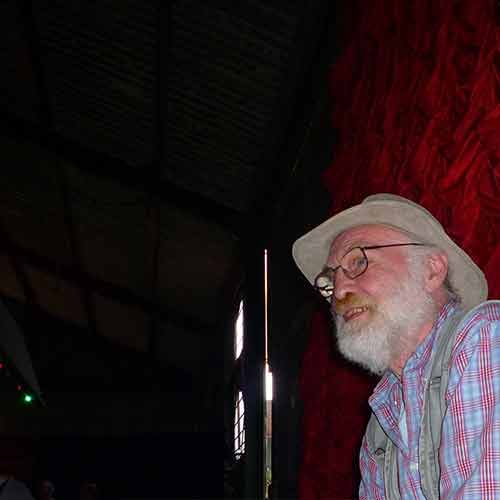 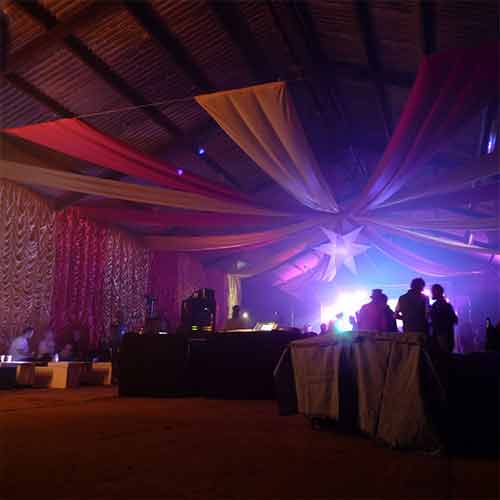 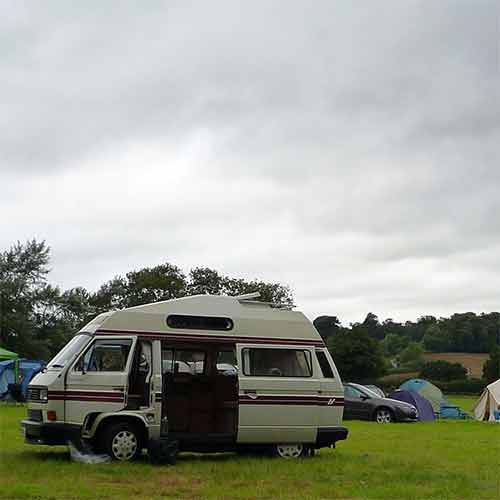 I came off stage feeling real elation and this was manifested with a few bods coming up telling me how much they’d enjoyed what I’d done – I managed to shift a bit of stock too – I’d brought along some copies of the new LP and some old EPs too. I packed up and went back to base to drop my gear off, and compose myself. Good gigs are special and don’t happen that often – consequently I find that I need some quality time on my own afterwards to get my head together.

The Swingle Singers were to play their gig in the barn, as the weather looked like it was going to turn, which it did shortly afterwards! The Swingles played the usual blinding gig – they really are amazing to watch live – then Pete started playing a DJ set afterwards outside, but the heavens decided to open at that point, so he was rushed undercover and completed his set inside – a real mixture of classics and newer tracks – most enjoyable.

The rains fell hard during Pete’s set – really torrential rain, so we waited until things had settled a bit before going back to the vans for some scran and prepared for a ‘night on the town’. There was a fancy dress theme which was ‘the circus’ so there were an awful lot of folks who’d made a real effort to look the part. Needless to say, I wasn’t one of them.

However, I did make one concession – Nina applied some false eyelashes so I spent the night looking a bit freaky. The music was great – we were treated to a DJ set from Simon Martin firstly, then a live set from Spirit Catcher, revving up the audience with some wicked tech-house. The Bays came on a little late, as Andy Gangerdeen was also playing a gig at Leeds and was running late. I don’t know, these superstar drummer types…

From what I can remember they were on typically brilliant form and it was left to Morris to close proceedings, which he did with his usual aplomb. I’ve got to say that he really is the best DJ. I ran into Mrs Hewetson Snr. backstage and chatted to her for a short time – she’s 69 and I’d seen her atop of the pole-dancing pole earlier on that evening… an incredible woman!

God knows what kind of time it was when we hit the sack; suffice to say, it was late. After the previous nights’ hedonism, Sunday proved a relatively sedate affair. Nina and I had decided to leave early evening, so it was a day of sobriety, sitting back at base chatting away. One real treat occured at about 4pm – we were all chilling; suddenly there was the most deafening roar and the Red Arrows appeared in formation over the treetops from behind us, a trail of red smoke in their wake. I’m still not sure whether this was simply a happy accident or whether it’d been some kind of pre-arranged stunt – I’d like to think the latter, but I somehow doubt it!

Ed and Nina left first, then Nina and I took our leave about an hour later to drive the 120 miles or so home. Just as well really; the weather seriously deteriorated on the Sunday night, torrential rain would have wiped out most frivolities!

What a top, top weekend – one of the best festivals I’ve been to for quite some time and I hope it won’t be the last time that I visit the Hewetson family at their lovely home – thanks to all involved. We loved it!!