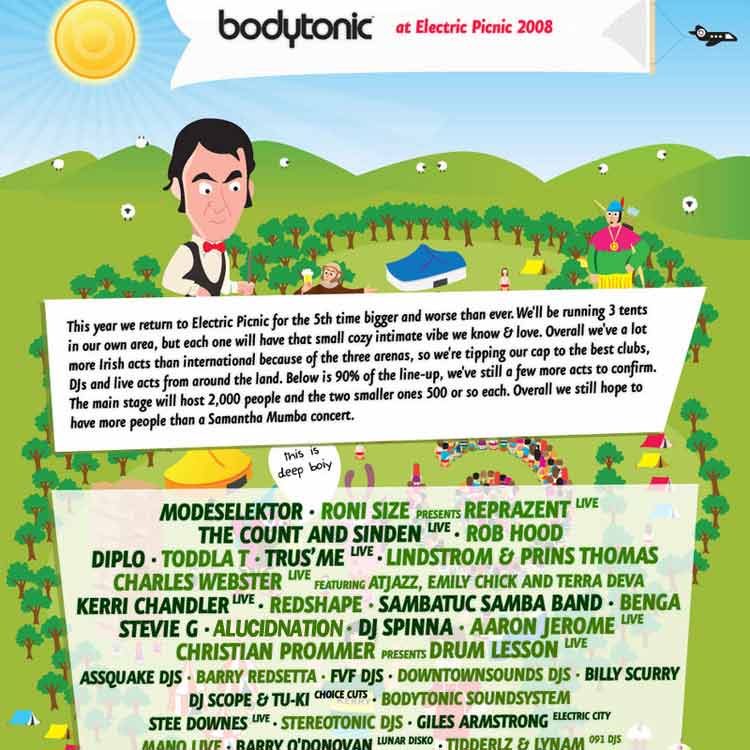 It was whilst at the Big Chill Festival in 2007, whilst DJ’ing on board a boat covered in tiny bits of mosaic mirror that I was asked by Avril Stanley if I’d be up for performing at the Electric Picnic the following year. The sun was coming up; the light from the sun was dancing off the lake; an idyllic setting, and of course I jumped at the chance to play out in Ireland. I’d heard about the Electric Picnic from various folks telling me what a fantastic event it was and that I’d go down a treat out there.

However, closer to the time, I’d started to get itchy feet. There were two reasons for this – one, I didn’t have any dosh to enable me to purchase a ticket for the trip over, and two, Festinho was the same weekend. Patrick Bickerton had been asking me to play at this (apparently) lovely little event in England for the last three years, but due to various back problems and other ailments, I’d always missed it. I’d made my mind up that I wasn’t going to be able to play at the Picnic, and I mailed Avril closer to the time to let her know that I wasn’t able to make it. However, she very generously increased the budget which meant that I was able to just about afford the trip over in the camper van.

I left at midnight, as the ferry from Pembroke was leaving at 2pm, and I didn’t want to get snarled up in any traffic. I stopped off to do my festival shop, and consequently was on the M4 by about 1am. My initial plan had been to drive to the Welsh border and then find somewhere the other side of Cardiff to crash out for a few hours, but in the end, I drove nearly all the way, eventually driving round some quiet country lanes at 4.30am in the vain hope of finding somewhere unobtrusive to park up and get some sleep. The van was giving me cause for concern at this point too as the engine was misfiring badly and losing power. This was the last thing I needed, as I still had a fair ol’ journey to do once I’d crossed the Irish Sea.

I woke up at about 10.30 and found that rather fortuitously, I’d parked up in a beautiful location – a proper ‘room with a view’! No traffic had passed me in the time I was parked up, so I felt properly rested and raring to go. On starting the van up, it was still not running right, but I didn’t really have any alternative apart from ploughing on. I just took it steady, and arrived at the ferry terminal with plenty of time to spare.

The crossing was pretty amazing as it goes – a dazzling variety of weather conditions – sea mist, sunshine and gentle rain; resulting in some pretty dramatic photographs. I didn’t get over to Ireland until about 6pm, then it was a case of driving the 80 miles or so over to Laois. When I arrived at the site, I was greeted by what I can only describe as organised chaos… I managed to get sorted with my passes and wristbands, and then it was just a case of getting in touch with my old mate Marcus, who’d already arrived on site and had found, in his own words, ‘a choice spot!’. 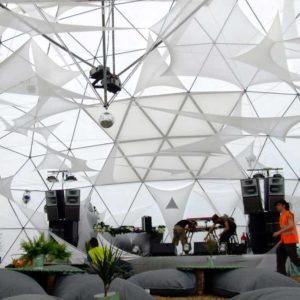 After a short drive around the site perimeter, I bumped into Marcus, who directed me to said ‘choice spot’, and actually, it was; right at the heart of the site by the main stage. The problem was that it had been pissing it down with rain on the run-up to the weekend, and consequently it was rather wet underfoot! No sooner had I driven off the perimeter road, I managed to get the van stuck in the mud! I got a little stressed about it, but the stress soon disappeared after a few beers and a delicious meal courtesy of Marcus.

Come the following morning and it was time to investigate the site. It was well laid out, with the Body and Soul area almost an oasis of relative calm amidst the rest of the site. There was some fantastic art installations; real care had been taken to integrate stages with their natural surroundings. I was due to play in the Merkabar, a huge geodesic structure capable of accommodating about 300 people. When I came to do the gig, the main problem was the sound spill from another stage that was positioned further down the hill slightly. I’d intended to perform an atmospherics set, but in order to compete with the noise that the other stage was making, I could only combat it with my own beats… still, it was enjoyable; Cal supplied some visual accompaniment, as Ed couldn’t make the journey. 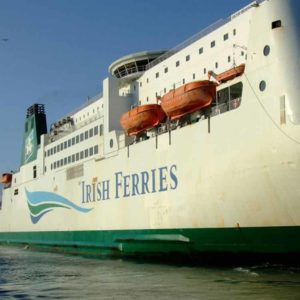 To be honest with you, by the end of the festival, I was pretty drained. Waking up to sambucca espressos each morning was pretty hard work! On the Sunday evening, I caught some of the Sex Pistols performance on the main stage, which was vaguely surreal, but then decided that enough was enough, and went to bed for a relatively early night in preparation for the journey home the following morning. It turned out to be a blessing, as Sunday night saw the most torrential downpour, which, tucked up in the dry warmth of the camper, I was obviously oblivious to!

I managed to get a tow out of the mud at about 11am, courtesy of Nick Seymour, who rather randomly, turned out to be the bass player from the famed NZ band, Crowded House. Smashing bloke, extremely low-key.

Then it was just a case of doing the leisurely drive back down to Rosslare for the ferry. I arrived just North of the terminus with lots of time to spare; certainly enough time for a walk along a beach and a spot of food before I took the ferry back to England at around 9pm.

The ferry docked at about 1am, so I drove back to the same place that I’d camped on the way over and enjoyed a blissful nights sleep, before heading back home down the M4, praying that the van would make it… it did, fortunately.

To sum up, a really great festival with a lovely vibe; no trouble, friendly Irish people and a fantastic eclectic line-up.