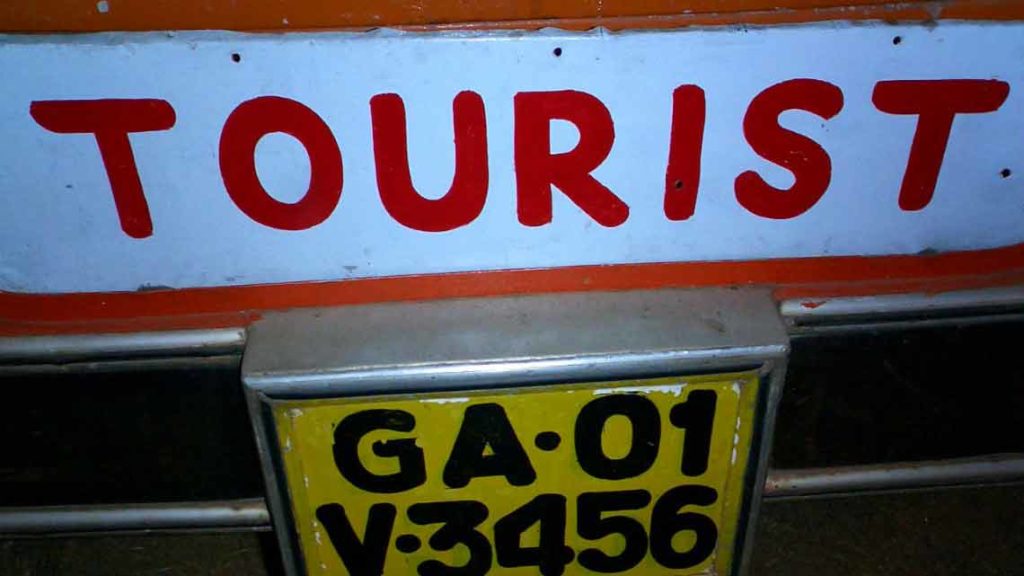 I’d heard about the likelihood of a Big Chill festival taking place in some far-flung corner of the world from Pete Lawrence a good while back, so it was with excitement that I learned that the Chill were planning on taking their festival to this rather beautiful and still unspoilt area of India.
Originally planned to take place in February 2007, it was moved to April, due to various logistical nightmares. Probably just as well, as the weather during February in Goa is unbelievably hot, hovering in the low to mid forties!

The Indian authorities were sceptical about allowing us to take the festival; after years of Goa having a reputation as being home to messy, drug-fuelled parties, they were now keen to give the impression of being intolerant to that type of behaviour. After much to-ing and fro-ing between London and Goa, and many visits by the organisers to try to placate and reassure the Indian officials that we were ‘different’, the go-ahead was given, and the lengthy business of sorting out the complex logistics of flying out thirty or so acts began in earnest.

It was during a visit to the Big Chill office a week or so prior to leaving for Goa that I sat down with Rui and looked at some of the pictures he’d taken on a visit that I saw the magic and real potential of where we were destined to go! It looked incredible..

So, fast-forward to the day of departure, and I was feeling my usual self about leaving home to embark on a trip away. Thinking about it, it was the first time that I’d ventured away to something like this without the ‘security blanket’ of either friends or family to ‘hold my hand’, so

I made an inward promise to myself to try to enjoy the whole thing to the maximum. It’s an promise that I think I kept..

The flight out was from Heathrow at a civilised hour of the day; I bumped into numerous folks I recognised as I searched for the right gate; Andy Nice, carrying his cello, Duck and Johnny Clash from the Bam Bam sound system, and Ruth and Laura B. We set off on time and, after a rather long but uneventful flight, we landed safe and sound at Mumbai airport. 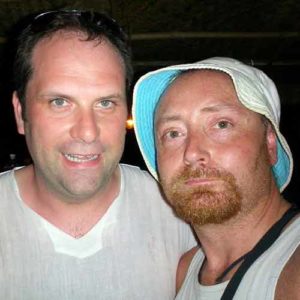 The first thing I felt upon disembarkation from the plane was quite obviously, the heat. It was a close, all-enveloping muggy temperature that really didn’t change for the whole of our stay there. Most days, the temperature was around 38-40 degrees c! We alighted a couple of small coaches that drove us the two or so hours to Aswem beach, where the accommodation was situated.

The artists and organisers were housed on three different sites; there appeared to be a three-tier class system! In the ‘posh’ hotel, which was equipped with the all-important swimming pool, the luxury of air-conditioning and a rather fancy menu stayed the more ‘established’ acts, shall we say; people like Sheila Chandra, Tom Middleton, Norman Jay etc., while down the road at the Casablanca you could find the ‘rest of us’! I have to say that I was as happy as the proverbial Larry with this arrangement; the Casablanca was owned and run by a Russian chap called Igor and his very pregnant new wife, who were the perfect hosts.

There were a really interesting bunch of people staying at this place too, old friends Dave Noble, Morris, Jim, the Rixons, Lol Hammond & Laura were staying in adjacent apartments, plus a lot of others whom I’d obviously heard about, but never met and spent time with properly; Jon Hopkins, Matt Black, Jessica Lauren, the Bam Bam boys, Pathaan; the list goes on!

So the first few days were spent immersing oneself gently into the scorching heat and trying to acclimatise. This proved pretty easy, provided you did as little as physically possible. On the second evening there, there was a little party for all involved at the ‘posh’ hotel (the name of which eludes me at present) which ended up being a really decent bash. As I mentioned earlier, the menu at this place was top notch – the owner had recently purchased the complex, and was making quite a name for himself in the locality for the exceptional cuisine. After a filling meal of seafood plus numerous bevvies, we trotted home and I spent a very hot night sweating myself to sleep, the only ventilation being an overhead ceiling fan that kept things just about bearable.

The morning after, Lol, who was staying in a room a couple of doors down from me informed me that he’d spent most of the night awake… after turning on his light to go for a pee he’d looked up and seen what can only be described as the most enormous spider he’d ever seen, literally inches above his head. Panicked, he’d grabbed the nearest available ‘weapon’ (his shoe) and beat it to death… Needless to say, I made sure that I checked my room very carefully each night before retiring. 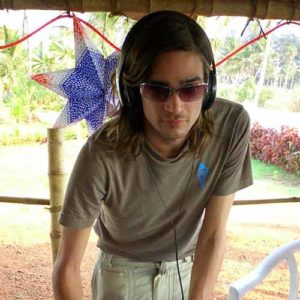 The event itself started on the Saturday, and on the Friday night Stuart Warren Hill (Hexstatic) turned up, just in time for his appearance the following day. We were all in the bar, sinking the local brews and chatting away, when in strolls Stuart wearing what I can only describe as ‘English’ attire – a heavy shirt, jacket and jeans – he must have been roasting. Neither him nor I needed much encouragement to start on the tequilas, which we did with gay abandon. Seven or eight slammers later we were both fucking hammered; he more so – the guy hadn’t slept for twenty four hours! Still, a top night.

The following morning, Guy Morley and I wandered up to the festival in the heat of the midday sun; needless to say I was nursing a hangover, but Guy was the perfect companion to chill with as we meandered the two or three kilometres to the festival site. To give you an idea of the heat out there, he walked about 25ft bare-footed on the sand and managed to scorch the soles of his feet; it was seriously hot, man.

The festival site didn’t disappoint. The crew had been working tirelessly to get all the decor and stages sorted out in time, and it looked incredible. After sitting with Guy and Morris drinking a couple of Lhasi’s, I checked out the site properly and saw the first few acts that were playing. Providing you were sat in partial shade, the temperature was just about bearable. The dance area, being mainly undercover, was almost derelict; it was just too hot in there.

Here’s some YouTube footage – there’s even a snippet of my stimulating performance at the 2m30s mark.

Highlights of the weekend musically were Sheila Chandra, an amazing performer with an easy stage presence and a seriously hypnotic set of songs. The Mad Professor was superb, Chilled by Nature’s early afternoon set was perfect, in fact I’m struggling to think of any one set that wasn’t any good…

I played on the Sunday to a small, but perfectly formed audience. The heat was a bit of an issue; perfomers who were relying on laptop computers found that their machines were refusing to play ball in the sweltering heat; just expiring basically. Fortunately, Laura had the foresight to bring a clever little USB-powered cooling unit that she kindly lent me – which meant that my laptop didn’t overheat during my set. 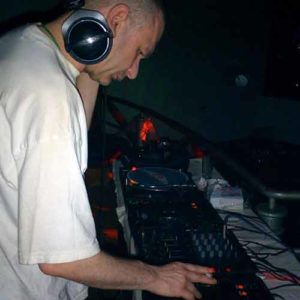 To the left of the stage, there was a body and soul area, where the audience were soothed by both a physical and aural massage during my set. I’d like to think that my music was appreciated. Morris came on after me and played a lovely selection of choice tunes as usual.

Coldcut finished the festival with a improvised set using a band of Goan-based musicians that they’d met whilst out there; full on hippy vibes… it was an interesting set and no mistaking!

On the last day we had out there, Igor had the good sense to hire a little rig that we set up in his bar at the Casablanca and then had a roster of DJs playing throughout the day – myself, Lol, Pathaan, Jon Hopkins, Daft Pink; and then to top it all, a fantastic fireworks display that Morris had the foresight to organise. I have to say that for me, this was the most enjoyable day; it kind of reminded me of the Naxos parties – a small, intimate venue and a lovely, communal atmosphere.