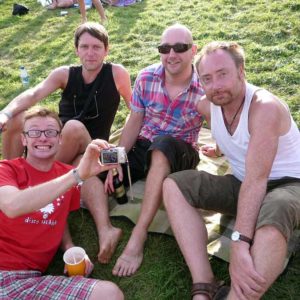 I’d been told that I’d be booked to play at The Big Chill earlier on in the year, but I wasn’t sure whereabouts. Still, I wasn’t really that fussed; my long awaited second album was ready for release on Big Chill Recordings, so as long as I had some kind of exposure prior  to the release date I was a happy chappy.

As is customary these days, Nina, Stuart and I left on the Thursday morning in order to get onto site at a respectable hour. This year, Ed [my VJ] and his partner Nina had arrived the night before and had secured a nice spot in quiet camping. The weather in the run up to the event had been quite honestly bloody dreadful; lots of torrential rain and not a whole lot of sunshine. However, Ed had assured me upon his arrival that the ground underfoot was still firm.

On the drive through the shires to get to Ledbury though, we encountered some seriously heavy rain; the drive past Oxford was particularly hairy. And the rains didn’t really subside throughout the whole journey, so by the time we arrived on site, it was pretty sticky on the ground. We followed an enormous Winnibago onto the site – a serious monstrosity of a vehicle – almost akin to the size of an jugganaught. It was towing a small Fiat Scientento, and I had a premonition that it would get stuck on the way onto the site. My fears were realised when the driver grounded it at possibly the worst place imaginable – between the two gateposts that led onto the main site!

So near, yet so far. We were literally 300 yards away from where we needed to be, but couldn’t get anywhere! I was also concerned that my VW campervan, shod with its oh-so-skinny tyres was likely to get stuck too. Which, of course, it did. It required a firm push from Nina, Stuart and a random passer-by to get it moving back up the field, whereupon I was able to enter the site via another gate… what a palava! 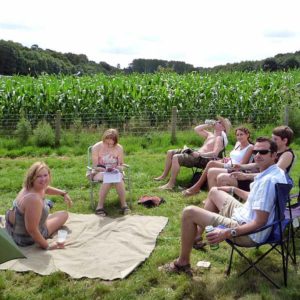 Still, after that it was plain sailing and we found our spot alongside Ed and Nina and co. This year, I’d decided to take a reduction in my performance fees to enable me to bring more family and friends along on the cheap, so consequently we had a fantastic bunch of folks camped with us… Nina came along for the first time in years, as had my sister Julie, her partner Simon and their two-year old, Beau. Stuart Nisbet, Tony & Corinna, Kate and Kieran, Chris & Deb and Chris Rowe… a really excellent vibe! The Thursday was the only day where I wasn’t ‘working’, but unfortunately I had to be up reasonably early for my breakfast show on Big Chill radio that kicked off at 8am on the following morning. Hence I had a sensible, early[ish] night.

So, come the Friday morning, I arose and wandered over to broadcast my radio show. The weather, true to form, had cleared up and I strode down the hill towards the station HQ in the glorious morning sunshine. The show was a treat… I played some lovely tunes to an appreciative audience, if the numerous texts I had were anything to go by. At 10am, I handed over to Kate and Kieran, and I meandered back over to base camp. The sun was well and truly out by this point; it was actually very hot!

Early afternoon came, finding me imbibing possibly a little too much cider at the Burrow Hill cider bus, which seems to be a permanent fixture these days at the Big Chill. In fact, it’s all coming back to me now… that’s right – I started drinking the loony juice during a DJ set at the Vida la Vida cafe. Mixmaster Morris was curating this stage, and I came on after DF Tram at around 6pm. After this, I’m ashamed to admit the night is pretty much a blur. I think I managed to drink about 4 or 5 pints of the stuff; I have vague recollections of sitting under a huge oak tree near the Stop the City stage with Tony, Corinna, Deb and Chris listening to Andy Gangadeen’s Black Sand project waft over towards us, but after that… not a clue. I do know that I didn’t get to bed until very late.

The following day saw me waking up with one hell of a hangover. Still, nowt that a hearty breakfast wouldn’t sort out. I had to keep my head together on the Saturday as I was rushing around doing various appearances. One of my tasks was attempting to arrange for my gear to be transported up to the stage where I was playing, all the way over on the other side of the valley. Usually, I’d carry it myself, but this year, there was a] more equipment to shift, and b] my back had been playing up and I didn’t want to rupture anything unecessarily.

By about 4pm, I’d managed to arrange everything, so all seemed OK to go. I then had to rush over to the Disco Shed, where I had a gig at about 4.30pm. This was the first time that I’d played in Patrick and Aidan’s shed, and it was a nice, mellow affair, although in this first incarnation of the disco shed, the CD decks played second fiddle to the turntables – as a result, they were placed in the most ridiculous position – the only way one could see what one was playing meant crouching down most of the time to see what the displays read… still, it was a decent little gig and I had a good sized crowd chilling outside in the sunshine. 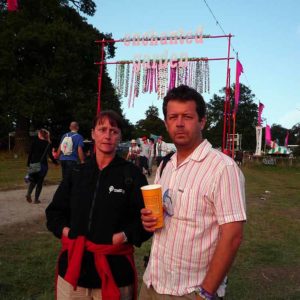 After this, it was simply a case of wandering around taking in a bit of music before I headed up the hill for my main gig of the weekend at the Stop the City stage. It was only when I arrived there that I realised that although the stage and the setting encompassed most of all what the original Chills were about, the actual logistics and organisation up there hadn’t really been thought through completely. There was no change over time, no compere and, to my horror, no toilet! However, the back stage crew were probably the nicest bunch that I’ve ever encountered, but unfortunately, the act on before me had brought along a VJ who had so much equipment on stage that it seriously impeded on my setup time and space. Consequently, even though I was due to start my gig at 10pm, I was still setting up at 10.15… this was rather upsetting, as I had the largest audience of the weekend up there waiting, watching me bugger about with cabling and soundchecking, rather than luxuriating in the sounds of alucidnation.

Laura B, bless her, had lent me some of her stands which I could set my gear up on, but in actual fact, once I’d erected it all and sat down, I realised that I couldn’t actually see any of my audience, as my laptop was positioned directly in front of my face. I was already stressing, and was convincing myself that this wasn’t going to turn out to be an enjoyable gig. Coupled with the fact that once I’d got started I realised that Ed was having ‘trouble’ with the visuals too; it all compounded to make the whole experience one similar to the kind of scenario where you want the ground beneath you to swallow you up whole and take you somewhere way away. It didn’t help that the temperature had plummeted as the night fell. I could hardly feel my fingers.

But hey. Upon finishing the gig, I had plenty of people coming up to tell me what a great performance it was, so it can’t have been all bad… That’s what gigs are like. You’re either totally ecstatic, or a bit deflated. There’s rarely any middle ground

Anyway… we packed up and got a lift back to base with a really decent chap in a Land Rover; the most enjoyable part of the evening was chilling back at base with everyone who we were camped with, having a nightcap and recounting the day’s events. 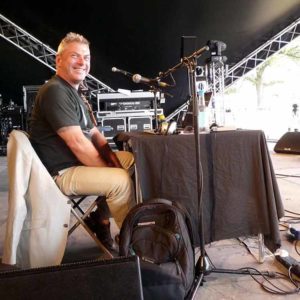 The final day saw me doing a gig alongside Pete Lawrence on the main Castle Stage… This was a sharp contrast to the gig the night before; I loved it! A main stage, lots of space, well looked after by the stage crew, a great sound and receptive audience… the perfect prescription.

Writing this in retrospect, I can report that this was the final thoroughly decent Big Chill Festival. I’m glad that I saw it out in such decent company with such close friends and dear family. Pete Lawrence had decided enough was enough and had left the Chill the previous year, Katrina was almost on the point of quitting, and 2009 was the final year before Festival Republic got their claws into the brand, making what had been a quirky, individualistic and cutting edge boutique event into a faceless, corporate, homogonised festival that was hard to tell apart from every other ‘dance’ music party.

An inevitable, but nonetheless sad conclusion to some serious golden years.