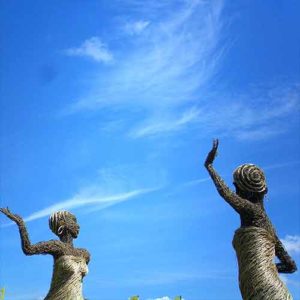 This was the sixth time that the Chill held their annual summer gathering at this stunning site.

The weather leading up to this weekend of frivolity and musical mayhem had been, well let’s face it, pretty atrocious. England had suffered it’s worst July floods on record, and places like Tewksbury and Gloucester had really taken the brunt of nature’s wrath. Just to clarify that these were the nearest towns to where the festival was taking place.

It wasn’t that surprising then to hear rumours which started to circulate in the weeks running up to the festival that there was a chance that it would be postponed due to too much rainfall. However, upon checking the official Big Chill site, they were at pains to reassure punters that everything was cool; it would be going ahead come what may.

And it did. I’ve said it before and I’ll say it again – I think that Chillfest must have done some deal with either God or the London Weather Centre depending on your beliefs, because the weather turned up trumps, yet again! OK, there was some rain on the Friday, but nothing to be overly concerned about. Incredible.

This year, I travelled down to the festival in convoy with Ed and Dave, in fact it was one of the first years where there wasn’t really any family camped around me in live-in vehicles. Felt kind of strange really, although we did actually end up with a really nice group of people, including Patrick and Libby, Harry and Rob Pollard. Ed was doing the visuals again this year for my sets and had brought just about everything (including the kitchen sink) to enable him to perform this task. Upon arrival, he erected what can only be described as an eyesore (a huge blue plastic tarpaullin) that was suspended between his and my vehicle. As the weekend progressed, the noise of this piece of plastic catching the wind became somewhat annoying, until it was ceremoniously ripped down very early one morning by the very person who had strung it up; Ed. 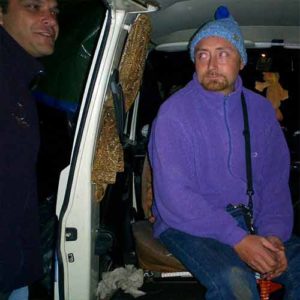 Ed hired a suitcase generator this year, which enabled us to have a little sound system and plug in power for things like laptops; this meant that we could work on my set whilst on-site, which for the first time was going to be completely live, running off loops in Reason. We’d done some rehearsals back in Harrow prior to setting off, which all went remarkably smoothly. Ed had also made up some tailor-made videos for some of the tracks that I was to be performing, including a very professional-looking film for ‘The Art of Conversation’, using Nina’s beautiful handwriting to spell out the lyrics in time with me singing them…

Fast-forward to the evening of the alucidnation gig, and all Ed’s hard work seemed to be worthwhile. Talking of the gig, well I’d spent the two days prior to the Saturday when I had lots on – socialising and getting drunk, like you do, but I kept myself clean and orderly all throughout the Saturday. The gig was at 8pm, we’d arranged transport to the stage with all our gear (of which Ed had loads) and all appeared to be fine until literally 25 minutes before we were due to go on-stage, when Ed realised that he’d left possibly the most important cable he needed back at the van! So he had to make a mad dash back to base with Adam (cheers man) to pick this cable up and get back before we were due on.

This year, I’d asked him to sit alongside me in the middle of the stage; it can get quite lonely up there on your tod, so it was good to have some company.

What was really nice this year was that the audience, even though there weren’t that many folks sitting there when we eventually started at about ten past eight, had swelled to pretty much fill the field by the time the end came. Musically, it was a real success, my new working methodology seemed to pay off, allowing a bit of free-form jamming to take place, and for the first time, the crowd were demanding encores!

Buzzing after the gig, we packed our gear away and ended up walking the majority of it back to the campers, having some well deserved soup and toast before heading back to the site for the rest of that evenings’ work. I had an after hours DJ slot in the Club Tent at 3.30am that night; now, the previous year had been fantastic in the respect that because there’d been little or no wet weather in the run up to the event, the crowd had been able to sit down on the floor of the club tent and really appreciate the chilled vibes. This year was very different – it was very muddy on the floor so no-one could sit down, unless they’d brought along some suitable plastic or something. 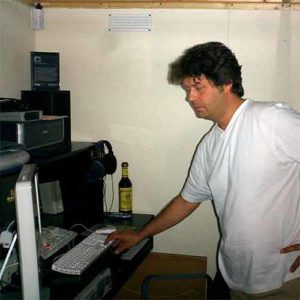 The Jupiter String Quartet played a stirring set of classical music before I got on to DJ primarily ambient music, but with a healthy dose of beats, which meant that the few people that were in there could move around – after all, there was plenty of space! I know that I really enjoyed this set, as did Ed, who was accompanying me with the visual side of things; the lack of pressure of having a big audience meant that he could experiment and indulge himself – it all looked pretty professional!

After this club tent gig, I then had to hot-foot it over to the radio station, as I was doing the sunrise set there. Although this year, it was slightly different in the respect that rather than it taking place in the safety and warmth of a studio on terra firma, I had to be rowed to a mosaic-mirrored two berth yacht which was moored in the middle of one of Eastnor’s ornamental lakes where I was to do the radio show! Talk about bizarre – I’d had serious reservations about doing this, but you know what? It turned out to be one of my highlights… once I’d actually got onto the boat, and had taken off the ridiculous trousers that they’d asked me to don (how they expected a bloke with a 34″ waist to get into a pair of size 12 women’s leggings I don’t know) I relaxed into things really nicely!

The sight of the sun coming up over the trees and reflecting off the water and the mirrored tiles of the boat was truly spectacular, and as predicted, there were people sat on the banks of the lake that were witness to this; as far as I know, there were no accidents either – amazing that something so precarious didn’t sink or something. Hang on though; I do have recollections of Marcus falling in!!!

So, that was the end of my involvement for the weekend. Sunday was spent chilling out, I caught probably one of the most enjoyable things all weekend that night in the shape of Larry Lush and friends rocking a little tea tent at the top of the Body and Soul field; my sister was there, great music, great atmosphere, the essence of what the Chill should be…

Then it was Monday, and it was off to Wales to help move my Grandma from her little house to a new flat. That’s another story though.