Crest of a wave.

Chilli Dog was designed to cater for Chillers who needed their ‘fix’ between festivals. Lol Hammond and Pete Lawrence scouted out the venue – the established DogStar pub in deepest Brixton, South London. Every Monday throughout 2002 different bods graced the decks; I did the first one alongside Lol and Pete and it was a great night – I even got a standing ovation at the end of my set for some reason – the only thing I can attribute this to is having finished my set with Ian Dury and the Blockheads…

I played a few more times over the course of the year; I got to meet some seriously decent folks in the process, too!

The Big Chill Love In 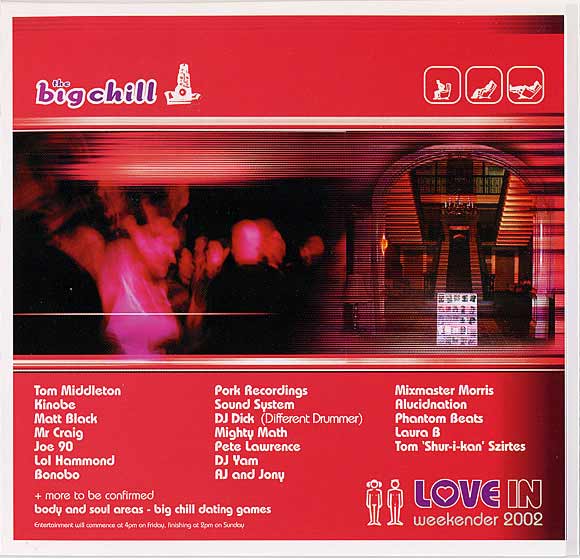 The second ‘Love In’ that I did for the Chill, and the third time that they’d put a party on at Baskerville Hall just outside of Hay on Wye on the English / Welsh borders.

This time I played on the Saturday night in the main room. The main thing that I recall is the temperature being bloody stifling. I played a similar set to the year before; a bit of singing but mainly instrumentals.

Anyway, the whole weekend was a belter to be honest. The lineup included Matt Black (Coldcut), Different Drummer SoundSystem, Laura B and Pork Recordings, amongst others. Other class moments included Tom Middleton’s set on the Sunday afternoon, which was divine – just what the doctor ordered.

This was an anti-slavery benefit that I was invited to perform at, alongside Nitin Sawney, Gilles Petersen and Asian Dub Foundation. So… no pressure, then.

It took place at the Scala in Kings Cross, London. To be honest, I was expecting something low-key, but when I arrived there, it was packed. I’d gone there with my old friend Alan Burney, who helped me carry my gear in – even he was surprised at the amount of people there…

So to go on at the end of the night and play a comparatively mellow set after the punishment of Nitin Sawney’s drill and bass set was a challenge, not least for the punters – most of whom split! I guess I could attribute this to the quality of the soundsystem – absolutely dreadful.

Needless to say, I haven’t played the Scala again. And neither am I likely to, now.

Artec was the musical collaboration between myself and my friend Stuart Nisbet. We were booked to play a couple of DJ gigs over in Seoul, South Korea.

We specialised in the production of deep tech-house vibes and on the strength of an absolutely storming gig we played at the DogStar in Brixton the previous December, we were booked by a promoter to play out in Seoul, South Korea of all places…!

It was an all-expenses paid trip to go out and play two venues over the course of one night, which we duly did. The promoter really looked after us – our hotel was pretty good, bang in the middle of the city. And what an odd place – when I visited Japan the following year in 2003, I guess it was similar to Tokyo, but the people were very different. I witnessed an awful lot of public drunkeness, more so than in the UK.

Come the night of the gigs, Stuart and I played together in the first club for about 45 minutes, and were then separated and I went off to another club to DJ. The experience was marred by the fact that the other DJs booked that night insisted on playing cheesy disco – house drivel and ‘hands in the air’ crap, which the audience appeared to really get off on.

Needless to say, my interaction with the crowd wasn’t tangible. I played what I considered to be some absolute deep-house gems, but I don’t think the promoter was that impressed.

Still, it was a great place to visit for nowt and I have fond memories of my time there, riding the subways and taking photographs.

This was to be the last time the Big Chill did a festival at the Larmer Tree Gardens, for me the best venue that they used. This is probably down the the fact that the first gala that they put on here in 1998 had been such a fantastic festival; very fond memories…

So to be playing here last thing on the Saturday night on the main stage was really quite something; quite an emotional gig in some respects. I can look back and realise that this was probably one the last Big Chill’s with the original ethos and aims of the organisation still intact.

Personally, one of my favourite performances. For a start, the sound was amazing, both on stage and out the front, according to people that I spoke to after I’d finished performing. There were about 2000 people watching me perform, and the highlight was debuting my 10cc cover of ‘I’m Not in Love’ which I’d been working on earlier on that year. I really felt the love from the audience.

In fact, ‘I’m Not in Love’ turned out to be one the tunes of the festival, getting lots of plays – I was there when Tom Middleton dropped it on the main stage on the Sunday night – man; it sounded amazing! 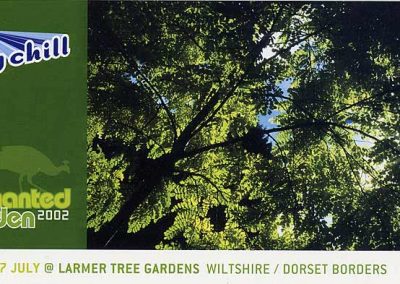 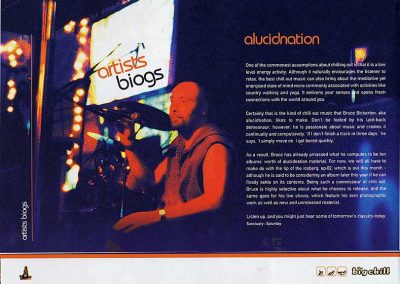 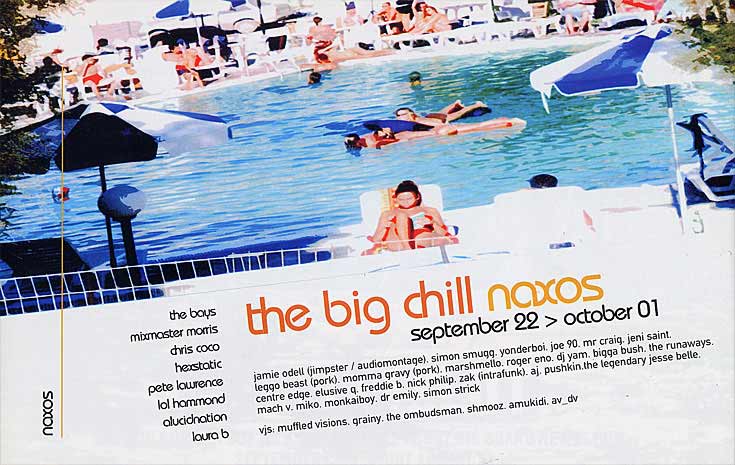 Nina and I decided to drive to Naxos again this year, but this time around, we took longer to do it. Travelling down through France and then under the French Alps through Mount Blanc was an experience that I’ll never forget. We stopped at Chamonix for a day and a night, and spent some of our time going up in a cable car to the summit too – the views were mind-bending!

Anyway, after five days on the roads and the seas, we eventually arrived at the idyllic island of Naxos for another 10 days of late-summer madness. The lineup was similar to the year before, but with some noteable additions – Roger Eno being one of them.

For me, playing out in Naxos is a very different buzz to playing anywhere else – it holds a real magic. I performed numerous times, my own sets culminating in the main alucidnation gig on the last day, a blissed out 2.5 hour affair, taking in a large body of work.

In terms of ‘Big Chill moments’ what has to rank pretty highly is the set that Laura B and I did together as ‘Survival of the Slowest’. We were about halfway into the holiday, and hedonism was running high. That particular day had seen some very violent rainstorms – I personally had never witnessed anything like it – it completely flooded the venue – inside and out! I’ve got a very definite memory of Ruari Cormac, who was looking after the sound, pouring water out of a bass bin! Anyway, that night, the weather returned to its usual calm, and Laura and I played a sublime ambient set. It seemed to be just what was needed after days of relentless beats.

This was also the very last ‘proper’ Big Chill. Shortly after we’d arrived back, the Chill was amalgamated with the Cantaloupe Group, with new directors gettting involved. This would ultimately change everything.

Any road, feedback for this last Naxos event was, and still is fantastic. The visual accompaniment to that night has launched several collaborations too. So it’s safe to say that I enjoyed Naxos 2002…